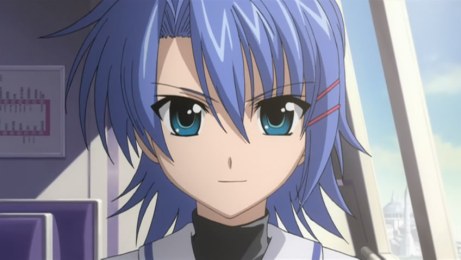 This first episode had a promising start. We have the typical Boy meets Girl and everything is going fine. Their ideals match each other so well that they made an oath to be friends and help each other out, with an underlying promise to kill the other should they stray from their ideal. And it was fine, I was enjoying the episode. That was until the later half.

That girl up there had a nice character going on. She’s righteous and friendly, well, she’s a bit prone to misunderstanding and I was okay with that. I liked her. But then the second half came around and I couldn’t stand her. So much for her righteous and friendly character. Once she learned that dude was going to be Demon Lord she went bat shit crazy and attacked him. She didn’t even question the divination and just treated it like everyone else did, they strayed from and feared him.

I thought she would be the one to stay by his side when everyone treated him like the plague. And I see this going on for the rest of the series…I dunno if I’ll be able to deal with it, but I’m willing to give it a few more eps.

The story and world seems interesting enough, but if I can’t stand the character I’ll stop.

One more thing, those things under the dude’s eyes are annoying.

6 thoughts on “Ichiban Ushiro no Daimaou 01”