Railgun best anime of the MILLENNIUM! BEST ENDING SINCE THE BEGINNING OF THE UNIVERSE! NOTHING WILL EVER BE BETTER THAN THIS!

The ending to the second season of Railgun was, for the most part, complete and utter garbage. It was one of the most idiotic thing I have ever seen… and oh boy does the Raildex universe have many of those, this goes up to level six. So many stupid tropes after another, so many ways to break the wall of belief, though really that wall has been shattered to pieces way before this season started, so many times I lost hope in the series… and yet… it was the most fun I had in a while while watching an episode!

It was so ridiculous and I was rolling my eyes the more it went on. I think I may have rolled my eyes a full three sixty. It was extremely entertaining, I loved every dumb moment of it! How could you not?

If you take it serious, of course you won’t enjoy it, but really… do you think Railgun was taking itself seriously with this finale? Way over the top.

I mean, c’mon, BLASTING A GIANT ROBOT INTO SPACE VIA KONGOU POWER AND USING ITS HEAD AS A RAILGUN BULLET!?

WHAT IN THE FLYING FUCK?

My palm has met my face many times through this episode.

I don’t take it too seriously, so enjoying the sheer stupidity of this ending made me love Railgun even more. If it didn’t cocktease us with Shokuhou I may even have made love to it 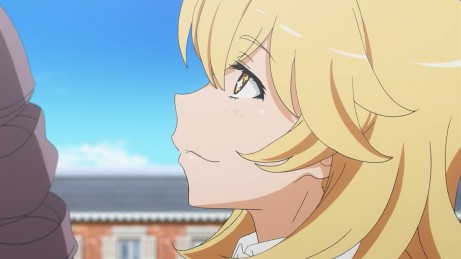 One thing I have to wonder though, is if this anime only arc breaks the Misaka Mikoto character. She’s a lone wolf, she doesn’t ask help from her friends as she wants to keep them away from the dark side of Academy City and she ventures out alone to settle whatever incident is surrounding her and endangering her school life. Yet, in this arc, she ask for help from everyone she knows and drags them into that dark side and introduces all of them to the darkness Academy City holds.

She doesn’t seem to do this in the next arc (timeline wise) if I recall correctly.

Haven’t read the Index novels, so wonder if Misaka is still non help seeking Misaka from before this Febri arc in the later volumes (if she even appears in them that is lol).

3 thoughts on “To Aru Kagaku no Railgun S”