Samurai Flamenco (Samumenco) was one of many anime I didn’t pick up when the Anime Fall Season ’13 started. I was interested in it, but I was prioritizing other anime first as I don’t have much interest in super hero anime. It wasn’t until about four weeks after the start of the season that I started to watch it, a few people were recommending this to me so I figured I would give it a shot. For the first few episodes, I thought it was great. There was this charm to it which completely had me hooked. Sadly, that didn’t last very long.

Samumenco’s charm was that despite being pitched as a super hero show, it wasn’t actually one. Or rather, it was a super hero show, but the main character sure wasn’t a super hero. He admired them, so he thought to become one. A guy with no abilities or powers whatsoever wanted to keep the city safe from crime and evil doers. His crime solving wasn’t much, the ones he targeted and solved maybe don’t even count as misdemeanors, the police don’t need to get involved. Seems like he was fooling around, but he was dead serious about this. Eventually, the degree of the types of crimes he prevented/solved increased as the episodes went by… and so did his crime fighting side kicks (rather, the side kicks wanted the spotlight).

It was charming. It had mostly everything which made a super hero show a super hero show, the only thing missing were the super powers and the big bad menacing the city. It was grounded in reality, and I loved it.

Everything was shattered in episode seven when it got super serious and shit hit the fan. During Samumenco’s escapades, there wasn’t any casualties at all… then a giant gorilla with a guillotine in its stomach caused the first fatality, leaving me dumbfounded.

I didn’t understand what was happening.

I couldn’t imagine a situation where a man would turn into a giant gorilla and kill a policeman… blowing up afterwards without a trace.

All this time I was made to think this was grounded in reality so I tried to figure out how it was possible. How, who, caused this absurdity. And I kept watching hoping this would be explained.

How the monster(s) blew up without a trace, how King Torture made a huge image of himself above the city. I wanted to know. I waited for the explanations, and I was getting more and more eager as it seemed the arc would be finished. They never came.

We simply accept this in any other super hero show. They are the bad guys, they blow up when defeated, let’s move on. No questions asked. It’s a super hero show, so we don’t seek explanations for the absurd appearances or unbelievable feats.

But here, Samumenco led me to believe this was all set in a setting very close to reality. And when it didn’t give me the explanations I wanted and instead shifted its genre, it lost all its charm.

It lost the very thing which made me keep watching after those first two episodes.

It’s not stopping there, it’s getting even more absurd as a new foe appears, From Beyond. 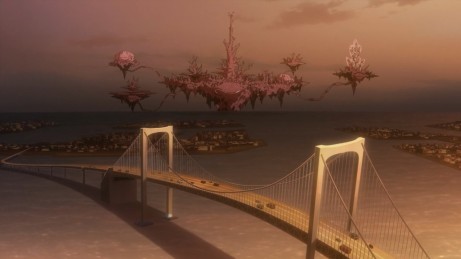 But now I acknowledge it. It took me far to long to accept its shift, and with it getting even more absurd, I’m done. I’m done with Samurai Flamenco.

The moment when it hit her was heartbreaking… but fantastic.