Alright~ Let’s begin the pseudo live blogging experiment!! As an added bonus, just to see how things go, I will try not to heavily edit the text written here. So expect to have some bad language along with this. But since it’s on my conscious now, I’ll be holding myself back…-_-

The edits will only be for spelling/grammar mistakes.

This should be fun…I hope.

This is kinda cheating though. I’ve already seen the third episode of Ookami Kakushi so some things are already on my mind. But hell, I wanted to give the experiment a try and I didn’t want to wait for a new episode I yet to see be released. If the rewatch fails, you guys won’t know ’cause I just won’t use it!!

I was thinking of doing a summary as things are happening just to make it longer. But then again, I don’t like TL;DR posts…too many people skip on them ’cause it’s too long. Myself included…

I’ve been keeping watch on Issei since his appearance in the second episode. Mostly because he was getting a bit too close to MEAL ON WHEELS. (Damn Shin for sticking that shit on my head.) Another reason is because the way he talks and smiles…he’s up to something. And he better stay away from MEAL ON WHEELS!!

Hiro is showing some interest in Suzu now! Which is funny ’cause this is the first time I’ve seen him tease Suzu, you tease your love interest~ XD

SEE THERE’S THAT LOOK! WHAT ARE YOU UP TO YOU FREAK!? Goddamn smirk. Smirking people are usually scheming something. Even if the person is the nicest guy ever, if he makes a face like that you can’t help but suspect something. 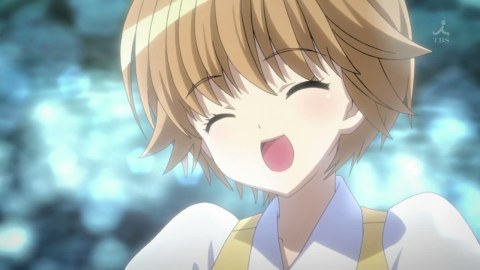 See Issei, why can’t show a non maniacal look like Suzu here? Suzu’s cute, really cute. Though I guess most of it has to come from the character designs. Reminded me of the character design from Shugo Chara. But she’s a bit annoying. So hyper and clingy…

She also seems to know about that schythe wielding blue haired girl who name’s escapes me. I wouldn’t be surprised if she’s part of it…or was part of it. It’s always the nice ones. 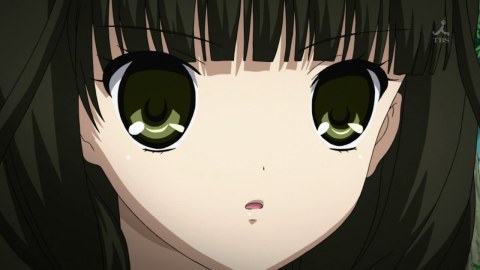 That’s for the pervs that come to my blog via the “loli” and “lolicon” search terms! XD 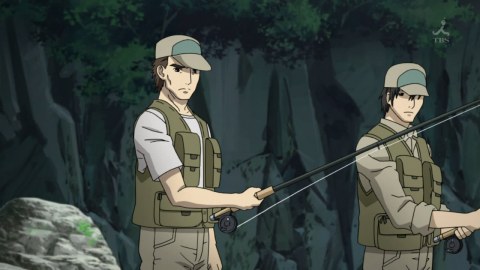 I wonder what’s up with these dudes. They gave Hiro a dirty look. Maybe they’re from the old town?

QUIT FUCKING TALKING TO HER DAMMIT!!! 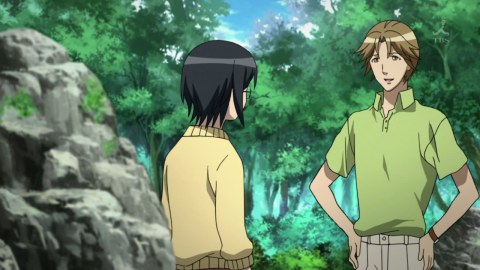 Okay, I knew this dude gave me bad vibes for a reason. You know what he just said to Hiro?

“Don’t worry about washing them. Wouldn’t want to get rid of your scent after all.”

Well fuck…YAOI RADAR ACTIVATED!! And with the preview from episode two…I know, and you know, what’s coming. That’s right, HE IS!!

Suzu comes in and says he’s saying weird things and joking around. But my gay joke filter didn’t act up…which means he was serious.

YAOI ALART YAOI ALART!!! And no screenshot ’cause it was too dark…but in the next scene. THIS DUDE TAKES A HUEG WIFF AT THE SWEATER HIRO WAS WEARING!!

I’m really hoping he’s the next target for that Schythe wielding watcha-ma-call-it. 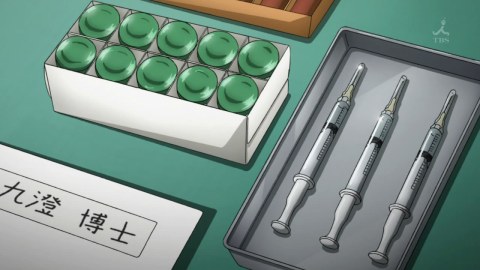 Hiro got sick ’cause he’s allergic to gay.

And why does the doctor need a blood test for a cold? Hmm…also, didn’t know what to make out of that scene with the doctor and black haired evil looking dude.

AND HIRO!!! DON’T GET ON THE CAR ALONE WITH THAT ISSEI DUDE!!!

Dammit, since I’ve already seen the episode, I know what’s coming. And watching it a second time is something I do not want to do. But dammit, let’s go for it. Issei here gets a bit touchy: 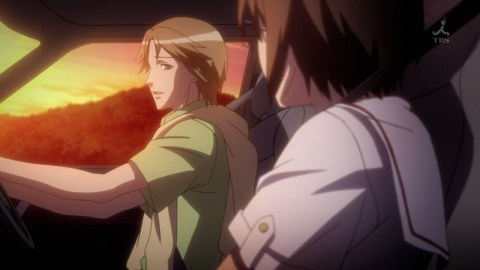 I KNEW THAT FUCKER WAS BAD NEWS! GODAMMIT! And no, you cannot pass that off as a fucking joke Issei. Hiro is not that stupid, well, maybe a bit stupid for he didn’t GET THE FUCK OUT WHEN THE CHANCE AROSE!!!

But you can be sure Hiro will have is guard up when this dude is around.

One thing in my mind has to do with the Hassaku oranges. Does the Hassaku fragrance keep their wolf tendecies or whatever the hell is wrong with them at bay? Issei backed off when Hiro accidentally kicked that bottle of fragrance and broke it. Issei also took medicine, which may have been make out of Hassaku…it was the same color.

There’s a poor Hassaku harvest…and shit is getting out of control, so I guess they are connected somehow. If it was explained in the first two eps…then I guess I wasn’t paying attention. ~_~

Not that I’m glad he did that stuff to Hiro… >_> And in the preview, HE FUCKEN DOES IT AGAIN! CARRY A DAMN HASSAKU ORANGE HIRO! >_<