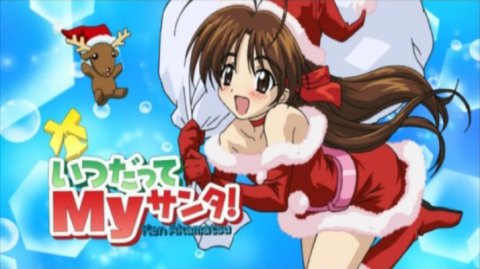 I don’t know why, but all of a sudden I went on a unexpected craze. As you can see by the title, the culprit is Itsudatte My Santa. I’ve heard of it before, but didn’t really take the initiative to look around and find out what’s its about. I seriously don’t know what sparked this sudden interest inside of me {I have a few ideas} to not only look for the OVA, but for the theme song, the insert song, and even all four character albums!!! Not only that, I also went on a special mission, to find the original one hit chapter from where all of this originated from, hopefully in English!! And I’m glad to say, the mission was a success!!

I haven’t seen, read, or listened to the OVA, manga, or character albums yet {I’ll save that for later! ^_^}. This is just a ramble post where I try to figure out where this interest sparked from: 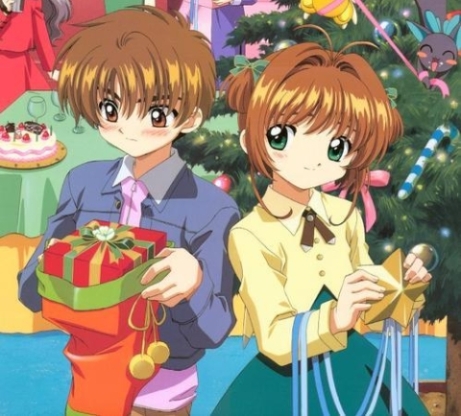 It’s not even December yet and I’m already getting into Holiday spirits. Just look at my current Desktop and my current Header up there. You can clearly see that I’m getting a very VERY early head-start. But I don’t thing it’s that. I did do some “Christmas Anime Wallpapers” searches recently, but nothing that lead me to anything that has to do with Itsudatte My Santa. Holiday Season, you’re of the hook…for now… ^_^

I started to read Love Hina again for no apparent reason again, I just randomly picked it up and started reading. Just like when I first read it, I still find enjoyment in reading it!!

“How does it lead to Itsudatte My Santa though?”
Well there is a Chirstmas chapter in there that I finished reading like a day ago. But I don’t think it was that. -_-‘

“Then how the hell can it lead you to Itsudatte My Santa?”
Easily…Ken Akamatsu.

Ken Akamatsu created both Love Hina and Itsudatte My Santa, in fact, Itsudatte My Santa came out first before even the first chapter of Love Hina did! {You can go ahead and add that to your “Useless Random Knowledge”.} While reading Love Hina, I checked his Wikipedia page just for kicks. And what do you see there? That’s right!! A link to Itsudatte My Santa!!!

AH HA~! So the culprit has been found!!! But wait a minute…I didn’t really paid any attention to that link and just brushed it off, besides I still have one more culprit.

A few months ago, I checked her discography over on her official site and at the way bottom I saw a character album for Itsudatte My Santa. This caught my attention. I was like: “What’s this Itsudatte My Santa?” But for some reason I didn’t really acted and searched for any information. Being the Hirano Aya fan-boy that I am, you would think that I would at least try to find this character album. But I’m not on that level {of obsession} where one must have everything from a certain series/artist/seiyuu/etc.etc.

“So which of these sparked that sudden interest?”
I think it’s a combination of all three. At first, I just went looking for the manga chapter and went all over the internet to try and find it. Leading me to Ken Akamatsu’s wikipedia page, which in turn lead me to Itsudatte My Santa’s page where I saw that Hirano Aya was Mai {the female lead}. On that page I also learned that it was made into a two episode OVA, so I searched for that. Then I went looking around IRC for the character albums because of my curiosity of what Hirano Aya and Tamura Yukari’s album would sound like. I didn’t even have to search multiple channels for my first choice, #LossLessOne, had it!! ^_^ Wai~!

And with this, I somehow got almost everything that has to do with Itsudatte My Santa without me even seeing the OVA!! It’s weird because I don’t go around looking for stuff from a series that I haven’t even seen!! It really was just a craze!! ^_^ I’ll take a look at all these goodies later, when it feels more Christmasy, that means when I start wearing a sweater!!!

6 thoughts on “Itsudatte My Santa Craze”