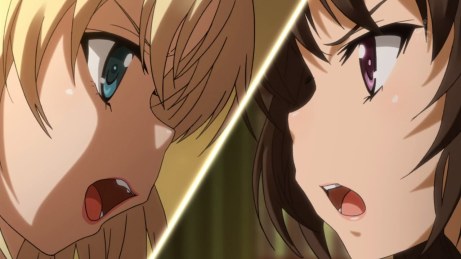 The Neighbor’s Club, a club created by Mikadzuki Yozora in order to make friends…allegedly. What does she do when the first hopeful, the self proclaimed awesome, smart, and athletic Kashiwazaki Sena, comes knocking? She slams the door in her face! Way to make friends Yozora! This can only go well.

Another thing, when I read the first volume of the light novel, I didn’t think much of the scene where Yozora tells Kodaka about her air friend. But now I thought…why would Yozora, a girl who is very unsociable, talk about her lack of friends to a guy who just happened to walk in on her? Going by her attitude, would she not just ignore him and leave? Why did she talk to him? Was it because she can sympathize with him?

Having read up to volume six, I understand now why she talked to him. It makes sense. lol

Anyway, these two girls will always be on each others’ throats. I don’t think their relationship changes much…I can’t even imagine these two being all friendly like in Kodaka’s fantasy (from the pilot episode). If they’re not bickering, something must be wrong with the world. Prepare for Armageddon.