Oh man… so much information was dumped onto us. Let’s see if I recall the important points.

Sasami ran away from the Tsukuyomi household, a household who inherited the powers of Amaterasu long ago. They keep their strong affinity with Amaterasu’s powers by keeping the family blood within themselves. In other words, incest.

This explains Kamiomi doting on Sasami and coming on to her every chance he gets.

However, while in the Tsukuyomi household, Sasami was given drugs so her desires would be kept on check. This is in order to not let her abuse her powers for herself and instead use it for the good of the people of the world.

Kamiomi, didn’t speak a word, or maybe wasn’t allowed to?, as he served Sasami. Also, his role was that of servant and stallion, you know, used for breeding.

So his face hiding is also due to Tsukuyomi customs. I thought the animators were being fucking weird at chosing no to show his face.

Anyway, so he now has the powers of Amaterasu, somehow. But before that, a mind blowing revelation: 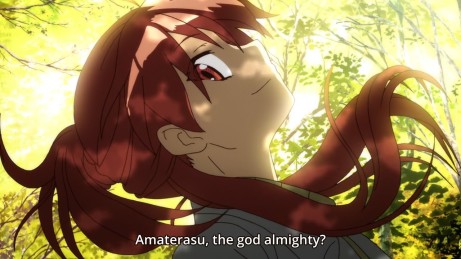 That I did not expect. I expected an onmyouji or something similar. Onmyouji are sort of like priests/exorcists who deal with youkai and their phenomena. BUT SHE’S FUCKING THE ALMIGHTY GOD AMATERASU!

So she’s the one who gave her powers to the Tsukuyoi family way back when. Why? Uhh… because she was bored of her powers, IIRC. I watched the episode only once ~_~

She created the other two girls who are with her in order to deal with the Alterations. Tama was told she was born from Amaterasu, so that’s why she calls Kamiomi “Papa”rin. なるほど~

Kagami on the other hand, somehow became an evil god and was modified into a robot… WHAT!? BY WHOM!? NEED MORE INFO ON THIS!! She took her back and is now a good god.

Back to the Tsukuyomi siblings:

Why can’t Sasami be out in the Sun? At first, I thought she was being overly dramatic because of her hikkikomori life. OH EM GEE THE SUN AHHHHHH

But after trying to go save his brother, who found out he has Amaterasu’s powers and went to the shrine so the Tsukuyomi household would leave Sasami alone, she couldn’t move any further than to the front of her house.

But when Tsurugi grabbed her hand and helped her up, she was fine, as if nothing happened. And when she let go, back to pain and unable to move. Now I’m curious. 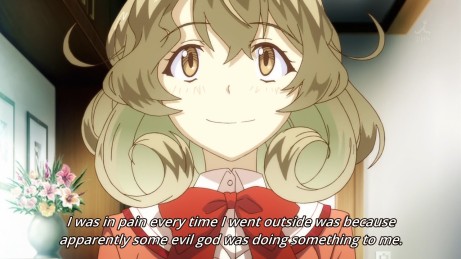 NOW I’M EVEN MORE CURIOUS! WHICH EVIL GOD WAS IT!?
(屮ﾟДﾟ)屮

And finally, Kamiomi didn’t actually have Amaterasu’s powers. They were still inside Sasami. So why did the world Alter due to Kamiomi’s desires? Because Sasami wished her brother would lead a happy life, the Myriad of gods took that as an order and made every desire of Kamiomi true so he would be happy… making it seem as if he had Amaterasu’s power within him.

Is that all? Did I get everything?

This is the final episode… right? Sure felt like it! lolol