It may be a bit hard to believe, but Miyuki wasn’t always the smiling energetic and sociable girl we know and love. When she was younger, she was shy and reserved. She found it difficult to talk to other children her age, so she spent most of her time reading story books, this is where her love for fairy tales stems from. But that alone isn’t what made her search for the ‘ultra happy’ feeling she’s looking for.

That feeling, came from a mysterious young girl in a white dress: 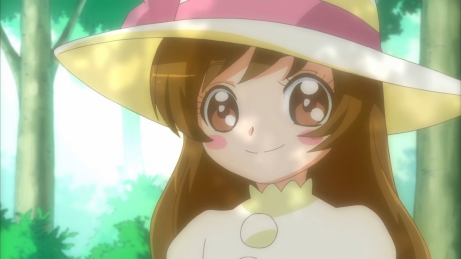 We don’t even get to know her name. Miyuki’s grandmother gave her a mirror, a mirror which she used to play and practice her smile with because her grandmother taught her: “Good fortune comes to those who smile”. That little mirror gave Miyuki more courage to be a bit more assertive and speak out to other children. But it wasn’t enough, she still could not properly talk with those girls.

That’s when the mysterious girl appeared. She would play with Miyuki and spend time with her whenever she was alone. Eventually, that mysterious girl was the one who gave Miyuki the courage needed to talk to the other children and become friends with them. 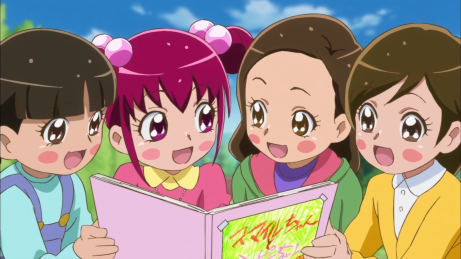 Having met friends who share her love for picture books and fairy tales, Miyuki felt a new type of happiness she hasn’t felt before. She has become ultra happy!

But in turn… the friend who gave courage suddenly disappeared without a trace. Not even her new found friends knew who she was. Who was she and where did she come from? Was she even human?

Even now, we don’t know the answer. But thanks to her, Miyuki became the girl we know and love. The girl who just learned what makes her truly ultra happy. That is, the warmth and smiles she gets from her dear friends, family, and everyone around her.

And that, is why Miyuki can have such a pretty smile:

We know the source of Miyuki’s smile… but what about the source for a certain someone’s hatred?

In a complete and utter surprise, Wolfrun comes back! I thought he was a goner after failing to defeat Cure Sunny.

I don’t care about the other two, Aka Oni and Majolina. I want to know why Wolfrun is so desperate in defeating ANY precure and avoid having to go back to ‘how he used to be’. Back to olden days. What’s the deal? His motivation is not like the other two, this guy really really doesn’t want that to happen, and his desperation in trying to avert such a fate is what makes me deeply interested about what his agenda is… just look at him: 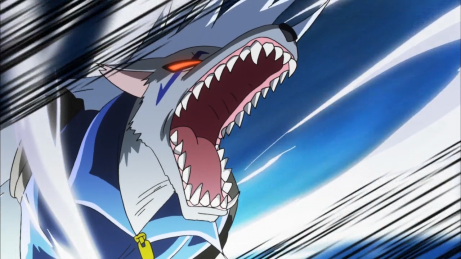 I really really hope they touch on his past before the series end… else I will be left forever in wonder. lol 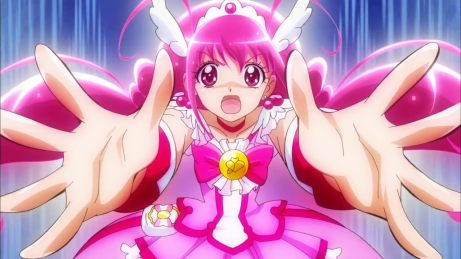 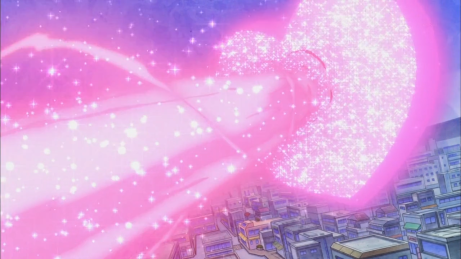 He received Cure Happy’s Happy Shower Shinning attack… and then the copy paste attack pattern of previous episodes, other precures come to save her just in time and then joint Royal Rainbow Burst. He received that Rainbow Burst twice already! lol