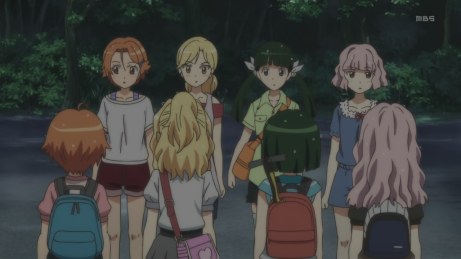 Loli version of themselves!! Hahahaha~ I hoped something like this would happen!

This episode was a little trippy… still not sure what actually happened. The girls couldn’t properly recall what happened when the went to do some ghost-busting, their memories where all fragmented, so they made a wish to the rock to help them remember. But what the rock did was a bit confusing. I’m not even sure what it did.

Did it bring their loli version to the present? We saw mini Saki in the living room with boxes all around her, meaning big Saki was packing stuff to move. And in Natsumi’s house, Kouta was there.

Did the rock take the girls back in time? When they saved their loli selves from the typhoon and were talking at the bus stop (picture above), the older version disappeared from there and appeared back in the same bus stop in the present{?}.

What the hell? That’s confusing!

This also means that the ghost their loli versions set out to hunt were their older version, and the thief Saki beat the crap out of with a nunchuck, was herself! lol