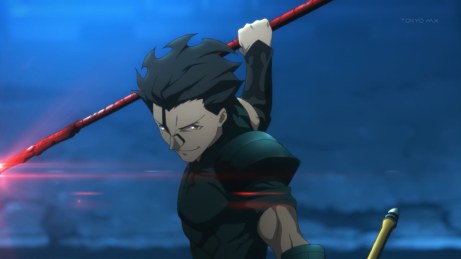 We have two of the knight classes battling out, Lancer VS Saber, and man was that awesome, such visual orgasm! My eyes completely dirtied the monitor.

Anyway, the battle was cut short by the flashy entrance of Rider, King of Conquerors (Alexander the Great). Gotta say, I love the Heroes from the Fourth Heaven’s Feel more so than from the Fifth (Fate/Stay Night). They’re more charismatic and stand out a lot more, making them more memorable. Rider just don’t give a fuck and does whatever the hell he wants, like interrupting a battle and proclaiming his name to everyone present. lol

The battle may have been interrupted, but it wasn’t without results. Both Knights figured out who each other really was and Lancer managed to land a hit on Saber with his cursed lance…meaning Saber will be handicapped for the rest of the war (or if Lancer is defeated). I guess this is a good thing, I mean, Saber’s stats are really high, so she needs a handicap to give everyone a chance of winning. lol

Well, I know what’s going to happen and know what both masters of these honorable knights will do…but I’ll leave it at that until it happens. People die because of spoilers.

And also when they are killed.

One thought on “Fate/Zero – First Battle of the Knights”