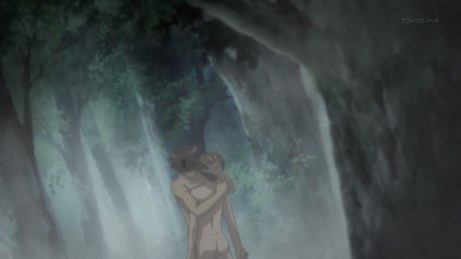 If you’re lost in the woods with you same sex friend and someway somehow you’re nekkid and it’s raining, you have to resort to basic survival guides and warm each other up with body heat. That is the way to survive, your same sex friend will understand.

And after overcoming such an ordeal, you’ll end up being even closer friends:

LOLWTF!? This episode was hilariously awesome, was LOL’ing all the way through! But the best scene, uhhh best FEMALE CENTERED scene was the ping pong scene. They see a ping pong table, EPIC LULZY DRAMA BGM! And the game? Such EPICNESS. SLOW MOTION FOR THE F@CKING WIN!!!!

9 thoughts on “[NSFW] Mayoi Neko Overrun – Alone in the Woods”