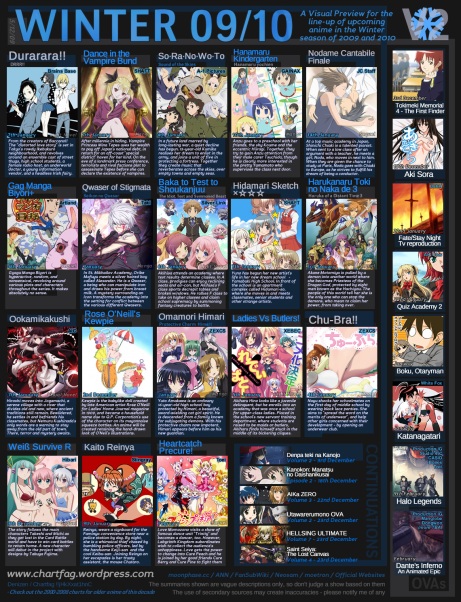 The 2009 Fall season has come and gone, and thus it’s time for the Winter to roll in. This post is the newer version of 53RG10’s Top 5 Picks for [Year] [Season] Season. I realize that kind of title is kinda misleading, making the readers think it’s about my favorites of the season and not about the top 5 I look forwards to…took me one year to realize… ”’orz

Anyways, things will be kinda the same, I look at Chartfag’s new chart and pick the anime I look forwards to watching. But this time, I’ll try to say something about all of them, if only a sentence, since there’s only a handfull of anime coming in Winter 2010.

Dance in the Vampire Bund

SO RA NO WO TO

Baka to Test to Shoukanjuu

That should do for main series, for OVA’s and such, I’ll probably give most of ’em a try since, heh OVA’s tend to be short. So to summarize, these are the five anime I look forward to the most: