Umineko no Naku Koro ni episode 05 was mindfuck enough with that whole other world thing. Then there was that one witch Bernkastel. Who looked and sounded very much like Furude Rika from Higurashi no Naku Koro ni. I thought this was just a coincidence so I didn’t think much about it. What was on my mind about the episode was what is going to happen next, a reset a la Higurashi perhaps, and what happened to everyone else. I guess they died, that’s the whole Beatrice coming to life deal…

Anyways, I remembered that I have not seen Higurashi no Naku Koro ni Rei episode 04 yet, so I went and watched…It too was mindfuck as Rika was stuck in a sinless world and she needed to kill her own mother to go back to the world she fought so hard to get. When she woke up from her ‘dream’, her friends pointed out how Rika was worrying over her choice, whether it was correct or not…something about a worry that only gods should have. She then spilled out a word that triggered something…witch. With that trigger, I literally got on the edge of my seat and read the next line: 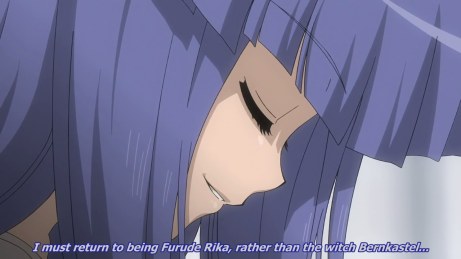 Right then and there…BRICKZ WERE SHAT! RIKA AND THE BLUE WITCH IN UMINEKO ARE THE SAME PERSON!!!!!! HOLY SHITTTTTTTTTTTTT!!!! ZOMFGWTFRLY!?

That really took me by surprise! If I had seen ep 04 of Higurashi Rei when it came out, I probably wouldn’t have been as surprised by this Bernkastel is Rika thing. This was a coincidentally timed MINDFUCK! lol