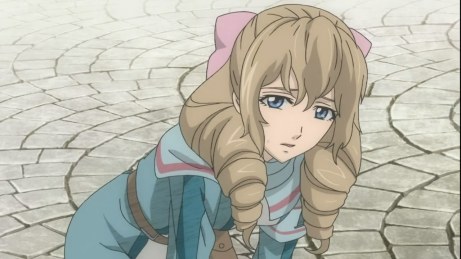 I saw this girl and asked myself…why the hell would they hire a fainting weak-willed girl to be a soldier/watchmen? I thought it was to give some sort of “I wanna protect this girl” kinda feeling to the viewers, but then I saw the little soldier kids and realized it was more than that. If you have to resort to recruiting kids and fainting girls into the army…it shows just how much in a crisis you are, which made Valkyria Chronicles that bit more interesting to me. I like seeing the underdog town/squad/etc. rising to the top!

At least I Am Boss Alicia {~♥} is a bit more competent…

By the way, I love the art style. Those lines in the shading have this visual appeal that…um…appeal to my eyes! ^_^ Very nice!

The scenes may be a bit LULZY…talking, laughing, and introducing themselves while getting surrounded and bombed? O_o Can’t it wait until they’re safe? …but I found it entertaining, was a good first episode.

9 thoughts on “Valkyria Chronicles – Last Resort to Save a Town”