I don’t really have much to say about Akane-Iro ni Somaru Saka, so I’ll make it quick.

Akane-Iro was your typical Ero-Visual Novel to Anime adaptation…and at it’s best it was less than mediocre. There were just too many elements we’ve seen everywhere else where it was better executed, well, except for the pr0n reaction! ^_^ Akane-Iro wins at that!

But despite it’s mediocre-ness, I continued watching it. 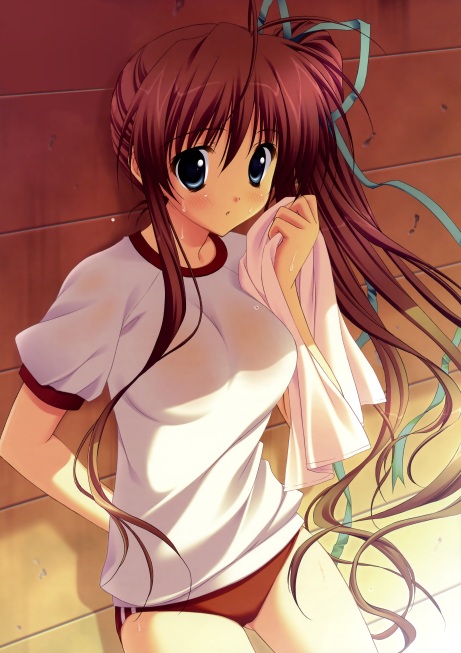 It wasn’t the best anime of fall ’08, frankly, I don’t think it should even be considered…>_> But I will admit that it had it’s fair share of moments that made the anime at least worth the watch. They may have been stupid, REALLY stupid, like the light-saber X Octo-sama deal and that whole giant robot deal, but to me they were quite funny and hooked me to keep watching. I’m easily hooked to stuff, so I may be the only one who thinks that Akane-Iro was worth the watch…>_>

Kugimiya Rie, Hirano Aya, Tanaka Rie, Katou Emiri and Hirohashi Ryou might have also been part of the deciding factor! ;)

As for the story, well here’s where all the generic-ness comes from. This is yet another anime where the lead is a lazy guy who can’t continue living without someone to take care of his basic needs…like letting him know where the shampoo is…

Enter Nagase Minato, his little sister…or is she? For the longest time I wondered if she really was her sister, you know that whole “Unreleated Siblings” deal, and she herself said they may not be related, she passed off as a joke if I recall correctly…She takes care of all his needs and just treats him like an older brother, that is, until the third party arrives.

She too was enough for me to continue watching! :)

She’s the rich ojou-sama who must marry someone because her parents told her too. She enters the Nagase household to find proof that the Genokiller is not a good match for her…or something. Along the way, she falls in love with the lazy dude who showed a sign of kindness {If that can get you girls, shouldn’t I have a HUUUGE harem by now? >_>} and manliness…and because of it, the sister too starts getting feelings for her older brother.

And now we have the typical love triangle, square if you count Ayanokouji-sama, and it’s up to the Genokiller to make a choice and choose one. He had the right choice for a while, but his homo friend just had to open his mouth and ask him if he can really live without Minato…confusing the mind of the Genokiller and filling it with incest…

Although I was completely fine with the anime, the last few episodes once again made me dislike this all so cliche plot. If he would have ‘chosen’ Yuuhi, I probably would like this anime more. Siscon endings are BAD ENDINGS to me.

{That’s right, I got a scoring system now!}

Proof Reading this made me realized I went lazy halfway through the post. Using things like “lazy dude” and “homo friend” instead of their names…-_-

Meh, too lazy to fix it…but not lazy enough to write this…