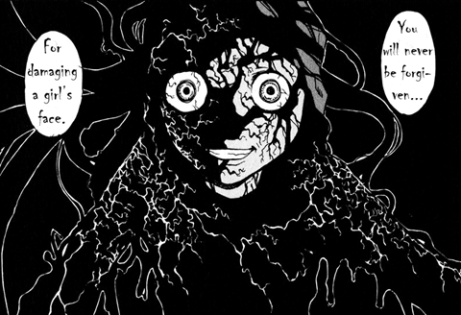 This is NOTHING compared to what’s in the manga.

Why is it that when people tell you not to do something, you go ahead and do it?? If I was asked to touch that exposed wire from an outlet, I won’t do it…but since I was told not to…well, you can pretty much guess what happened. ”’orz

I’ve had Tokyo Akazukin on my computer for a few weeks now and was planning on reading it after catching up with Ai Kora. But a certain omisyth tempted me to read it with a post asking us not to…and well, curiosity got the best of me and I read it…ALL OF IT!!

This manga was filled with lots of blood, gore, sex, rape, and confusion. If it wasn’t for the fact that loli Akazukin (Red Riding Hood) was an immortal demon carrying some big guns, I probably would have dropped this after chapter one. But since my curiosity was at an extremely high level, I keep reading it ’till the end…where I met with yet another Gainax Ending…But at least this was a bit better on the brain. I was confused at what the hell was happening in the end, but not enough to make me dislike it.

In short, this manga is really graphic, gruesome and will defile your innocent soul. If you read this and like it…I’ll see you in hell. :)