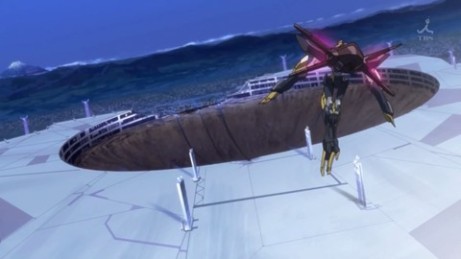 FREYA has been used! O_O And with it goes a beloved character of the series, Lelouch’s sole reason of being, yup, that’s right…Nunally!!

OMFGWTF!! I mean, I can understand killing off Shirley, but Nunally? She’s the only thing that drives Lelouch and the reason why he’ll go so far, and seeing that she’s gone now…probably, you never know…what the hell is gonna drive Lelouch now!?

We can guess how Lelouch and Suzaku will take it. Suzuku fired the nuke, thanks to his “Live On” geass, so he’ll be all emo and blame Lelouch for it. Lelouch of course will be all emo and will lose all his will, and he’ll blame Suzaku for firing the nuke…

Not expecting much from next episode since it’s gonna be the emo episode I guess…>_> But dammit I’m yet again left hanging on that damn cliff wanting MOAR!! >_<