This idea was introduced to me way back on February 2007 by deftoned when I read his “Featured List: My Personal Harem” post. It was an interesting idea and I wanted to do one too…but at the time, I hadn’t watched enough anime to be able to make my own personal list of girls I would like to vie for my love! But now, now is the time! ^_^

I’ll be following the rules deftoned made to Jason’s Harem {From Anime on My Mind}, which are:

“Harem is a term used to describe Japanese works wherein a single average male character is surrounded by numerous (usually three to seven) attractive females, most of whom are romantically interested in the main character. The term “harem” is generally not used by itself, but as an adjective to the medium—such as harem anime or harem manga.”

I’m a single average male…SO WHERE THE HELL ARE MY SEVEN ATTRACTIVE GIRLS!?!? >_< *Sigh* I guess I have to take matters onto my own hands…stupid real life. >_>

No surprise here considering my obsession! ^_^’ Like I’ve said before, even though Komaki Manaka is your typical overly nice iinchou who would do anything she is asked, usually overworking herself, and even though I’ve seen this typical character many times, I’m completely infatuated with Manaka! It’s a good thing she’s absolutely cute and an overall nice girl!

Also, it would be nice to just sit down in her little library and drink tea with her and talk.

Every harem REQUIRES a tsunderekko! But oddly enough…I didn’t choose Kyou because of her tsundere nature. I picked Kyou because she seems like the most fun girl out of all shown here. She’s one of the few girls with whom I would like to spend most time with because she, unlike many here, would crack jokes and throw tsukkomis {and dictionaries} here and there! Talking with her would be so much fun…probably more fun than making her go dere dere! ^_^

Also, along with Komaki Manaka, she’s one of the few characters I can imagine nekkid!
…
..
.
I’m such a perv…”’orz 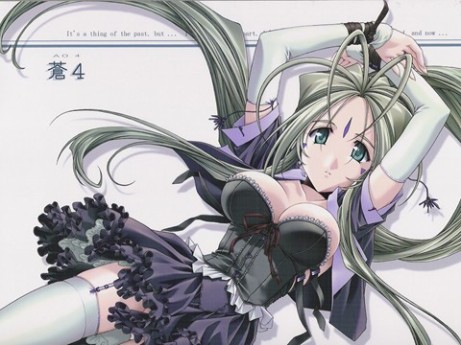 What would be better than a goddess vying for your love? Probably a god…>_> But honestly, Belldandy made the list because of her ‘onee-san’ love. She’s the type that would cook for anyone and take care of them! ^_^ And oh do I want her to take care of me!!!!

Kinomoto Sakura has to be one of the moe-est characters I’ve ever laid my perverted eyes on. Ever since Cardcaptor Sakura, I have considered Sakura as one of my favorite characters and was laid in stone once I saw her grown up self and when I realized that even after 8 years, I still like her. Even if she’s older, she is still so adorably cute~! To me, it wouldn’t matter which Sakura is in my harem since both have the same personalities and moe level. But if I have to type cast, then it has to be loli Sakura because we all need some loli love! 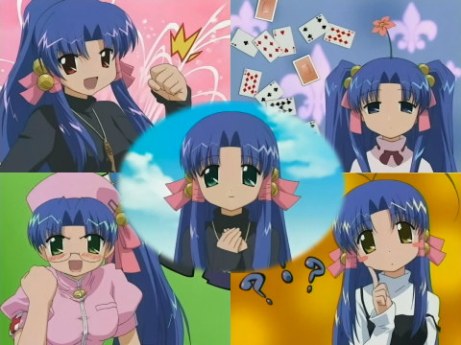 The reason why I didn’t add a name up there was because this girl goes by multiple names…which depends on which personality is currently taking over! I dunno…but I feel like I’m cheating somehow! ^_^’

Thinking about it now, it seems that Aoba Kozue (Center) can take most spots in a harem. We get the though and loud mouth tsunderekko Akasaka Saki (Top Left), the shy quiet magic using girl Konno Natsume (Top Right), the cosplay maniac meganekko Midorikawa Chiyuri (Bottom Left), the childish Kanazawa Nanako (Bottom Right), and of course, the nice and gentle Aoba Kozue (Center)! Everyday would be a surprise because I might not know which personality may come out.

Plus, Midorikawa Chiyuri {the cosplay maniac}, will surely satisfy all my fetishes as she forcefully takes the other girl’s clothes off and gives them “better” clothes…which of course would be things from Nurses to Neko-mimis! ^_^

Also, I guess I don’t need to say this, but I’ll be having more fun making the loud mouth tsundere Akasaka Saki blush! ^_^’ By the way, Akasaka Saki is a fine example of what is “tsundere”.

Don’t let that innocent look fool ya. This girl would be the cause of most major nose bleeds…for you see…she’s a lesbian! ^_^ To add some spice onto my harem, I decided to include a yuri meido that would go crazy at the sight of these cuties and glomp them! She may not do any maid work at all, but frolicking with the girls and giving me major nose bleeds compensates for that! Besides, Komaki Manaka will just take up the maid work {extra moe points for her} since she’ll do anything if asked! ^_^

So there ya go…the five girls {plus maid} I want to compete for my love! ^_^ But, there’s something else:

In every harem there’s one girl whose love endures all and becomes the ‘winner’, so I guess I have to choose a winner out of these girls. Sadly, I can’t have all of them…and trust me, it was a hard choice to make…it took me a day, but the winner is: 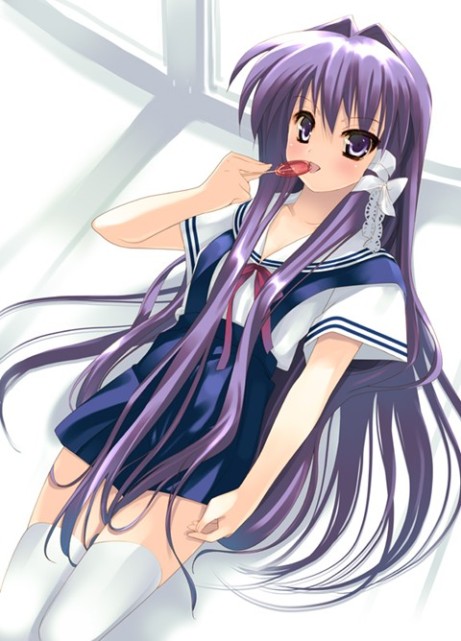 Like I’ve said, she’s seems like the girl I would be most conformable talking to or hanging out with. My affection towards tsunderes actually had little play in choosing! ^_^ If it was based on tsundere level, I would’ve chosen Akasaka Saki without a second thought…which oddly enough was the top contender vs Kyou! ^_^’

19 thoughts on “My Personal Harem”