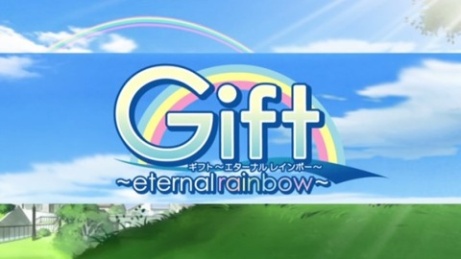 I don’t know if there are still some lasting effects from Canvas 2, but I didn’t really enjoy Gift ~eternal rainbow~ as much as I should have. Is it because I’ve seen TOO many romance type anime that I’m not surprised by their themes? Has seeing these themes over and over made them, for a lack of a better word, stale? Am I getting bored? Hmm…I don’t think so, seeing as I’m still interested in DaCapo II S.S. ^_^

She had major points for playing the {acoustic guitar} during the ED…but lost them all.

So why is it that I didn’t really liked Gift ~eternal rainbow~? Honestly, I think it’s that “I live with my Onii-chan and I’m in love with him…good thing we’re not blood related” thing…I’m not too fond of it. Like I said on the Canvas 2 post, I’ve seen enough of that plot device in DaCapo. I didn’t really clarify on WHY I don’t like that theme, so here it goes:

For one, I don’t buy that living with someone, who is not related to you, since childhood would make you fall in love. I think the opposite would happen, you would just treat that person as a part of the family. I don’t have, or know anyone with, this experience, so my opinion holds no ground and I’m just saying what I think.

And second, the male lead ends up choosing that person {living with him} rather than the one better suited for him. Take Canvas 2, Elis is NOT a good match for Hiroki, Kiri is. And in DaCapo, Nemu is NOT a good match for Junichi, Kotori is. In both of them, the person chosen is just an annoying clingy girl…At least in Shuffle!, Rin chose the girl who is better suited for him. {That’s one reason why I still love Shuffle! ^_^}

Gift ~eternal rainbow~ was just like these anime where the lead chooses the one he lives with. It was mostly about Riko and Haruhiko and their awkwardness towards the childhood friend, Kirino. Also thrown into the mix is the power of Gift. A magical ability all the townspeople have and can use only once. At first I thought it was just a silly plot device, but later {in episode 10}, it became a serious issue thanks to emo Kirino…who also saved the anime!! ^_^

I think I might have liked it a bit more if the other minor character had gotten some screen time. We get an introduction of them in the first {and 2nd} episode, but they are forgotten about until the last episode {when they’re shown during the ED credits}. I was at the point where I wanted to drop it…but one thing and one thing only held my attention. Had I not browsed through the last few episodes, I would have missed hearing emo Miyazaki Ui {along with some nice drama}!! 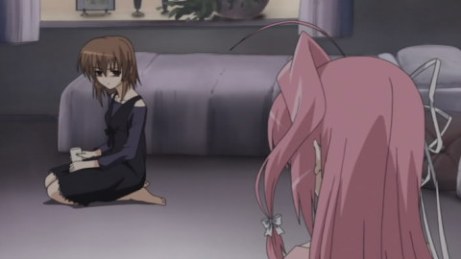 It’s not a lie when I say that that alone saved the anime for me. Had I not browsed to see if there were at least some minor character screen time, I would have dropped the anime since nothing exciting happened. I was treated to was some much needed drama, excitement, and twists! I think that scene alone was the one redeeming quality for this anime. And thanks to that, I managed to finish the anime and arrived to the final episode where I got yet another “I choose my {not real} sister” ending… -_-

This wasn’t a great anime nor it was it a good anime, I wouldn’t really rave about it, but it was okay. Would I recommend it? Hmm…only to Miyazaki Ui fans who want some well acted emo-ness, to anyone else, nah, go watch DaCapo or Canvas 2 instead…Gift ~eternal rainbow~ should be watched if you’re completely bored like I was…