Yes, I spoiled CLANNAD by playing the game. But what else was I supposed to do with no internet and with lot of time on my hands? I was saving it until the anime ended, but my boredom was so great that I just started playing, telling myself that I would only play through what I’ve seen…mainly the Fuuko and Kotomi Arcs. I didn’t want to touch the main story, which is Nagisa’s, but how the hell can you not choose to follow Nagisa when she makes that trademark giggle “Hehehe~!” followed by that killer smile?

If you can pass this up during your first run…YOU ARE HEARTLESS!!!

Luckily though, or is it unluckily?, my first run shifted towards the Fuuko arc, without me actually realizing must I add. That only happened because Nagisa asked me if I could help her with Fuuko…and who can deny a request from Nagisa? After the credits rolled up, that should have been the time I should have stopped playing…but no, I got addicted. Before I knew it, I was running through almost everyones arc, including Nagisa’s {but I think there’s more to her route than what I got, I say that because the squares after the last CG I got remain empty until they reach the Fujibayashi Sisters’}. And on this Fujibayashi sisters matter, why is it so freaking hard to find Kyou’s arc!!! >_< Each time I tried, it led me to a dead end…one of which is really fit for a drama show. Twins in love with the same guy and the guy is interested in the twin he’s not dating just screams drama!!! One, if not THE, most interesting “Dead End” in CLANNAD.

Anyway, those useless two paragraphs were just to say that I pretty much know what goes {or will} go on in CLANNAD and that I spoiled myself bad. But after catching up on the anime, I was pleasantly surprised that I can still know what is going to happen and yet still enjoy the way it was animated and it’s subtle differences {or similarities}. (The biggest difference is the new uniform and the play will not be on Founder’s Day.)

Like when Tomoya put his hand on Nagisa’s shoulder when she was crying, I was hoping to see a similar scene like in the game, but no, surprisingly and much to my pleasure, Kyou comes out screaming “Koraaaaaa~!” making both Tomoya and I jump in surprise! For a split second I though, “Kyou Noo~ Don’t interfere!” ^_^ But suddenly got bearings when I realized she didn’t scream because of the ‘atmosphere’…or did she? 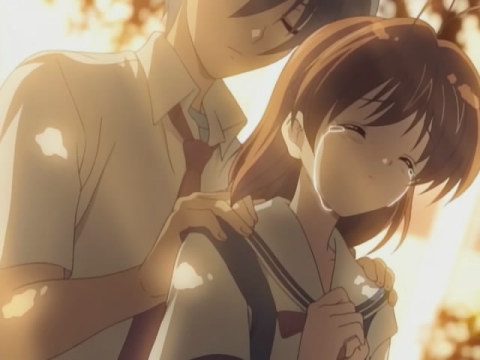 I just love the way Kyoto Animation was able to successfully weave the remaining arcs into a single path. It was so well put that it seems that it’s supposed to be like that. There’s really not a set of episodes for the “Kyou Arc” or “Tomoyo Arc” or other arcs like there was for Fuuko and Kotomi. Although it seemed like Yukine’s arc {or part of it} was there just to strengthen Kyou/Ryou’s arc. How would the scene of episode 18 have that extra amount of impact if Kyou didn’t show that moment of weakness inside the gym storeroom? You can tell that she likes Tomoya but like the Tsundere that she is, she never said it, but in the gym storeroom, she was actually giving him hints. She could have very easily beaten the crap out of Tomoya, but she just blushed without showing much resistance!

The best difference that I liked the most was during episode 18 when Tomoyo was playing tennis, {which is something that wasn’t in the game by the way} and Nagisa was hit by a stray ball. As the player was about to touch Nagisa, Tomoya unconsciously stopped him, and at this point everyone interested in Tomoya realized who Tomoya really likes. Kyou, Ryou, and Tomoyo at the same time knew that Tomoya had made his choice, and they had to accepted even if it was hard for them. It was especially hard on Kyou, as much as she tried to get her sister with him, she seems to like Tomoya more than Ryou does. Ryou knew this, that’s why she said sorry, making Kyou break into tears…

Episode 20 is really the start of Nagisa’s arc…now to wait for the rest of the episodes of CLANNAD.

It’s been a while since I’ve done a CLANNAD post, so here I’ll post all the complimentary Kyou shot for each episode I’ve just seen!!! Weird trend I picked up since episode 09… ^_^ 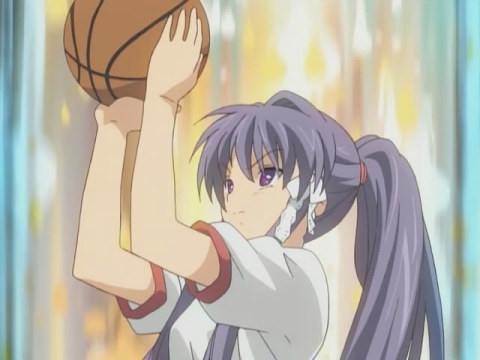 EP 19: The smile of acceptance…*Sniff*

6 thoughts on “A spoiled CLANNAD tastes just as sweet!”