I haven’t seen the other two discs of this awesome performance, I’m taking it in one at a time!! ^_^ This is just {some, not all of} the performances from Disc 1. I’ll add images once I figure out why the hell I can’t screen cap!! {Alright! I Figured out what was wrong, it was something simple really…overlays was on. ^_^’ But what’s with that red outline??} I wrote everything here while watching the concert (I paused in between performances of course!!!), anything in RED is what I added after doing a bit of research! 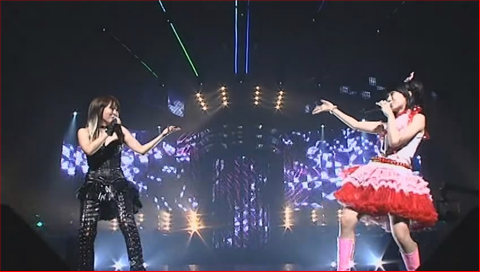 Revolutionary Girl Utena OP. Add Mizuki Nana to the mix and you get instant win!! An awesome way to start the concert ne?

“Romantic Summer” is the OP for one of my favorites comedy anime, Seto no Hanayome. Oddly enough, Nogawa Sakura didn’t sing along with Haruko Momoi, which made the song lose a teeny bit of it’s charm. But Haruko Momoi’s performance and energy was more than enough to satisfy!! I hoped for “your gravitation” after the song, but we got “WONDER MOMO-i”, which was also performed with such great energy! I said it before, but anything sung by Haruko Momoi become a fun/likeable song! ^_^

Were “Junpaku Sanctuary” and “Kimi ga kureta ano hi” featured in some sort of anime that I don’t know about? Isn’t that what Animelo is all about, songs featured in anime? Not that I”m complaining, I’ll welcome Chinara Minori anywhere!! ^_^ I loved her performance on the “Suzumiya Haruhi no Gekisou Concert” and re-watched it the most, so it was a treat watching her in Animelo! /me is liking Chihara Minori more and more!!

AHA! Now I know why she sang “Junpaku Sanctuary”!! Because it’s going to be the ending theme for the upcoming second season of Kiddy Grade!! ^_^

Rozen Maiden Traumend’s OP. I knew this was a duet by reading other people’s blog, but as the song was starting I wondered where Mizuki Nana was. And all of a sudden she just popped up in from of Takarano Arika from a hidden door sporting this kick ass looking goth-y dress! That was awesome!! ^_^ I’m not really a fan of Ali Project, I just like a few songs. “Seishoujo Ryouiki” is a good song, but I prefer “Kinjirareta Asobi” Rozen Maiden’s OP a bit more!! Pretty much anyone paired with Mizuki Nana will make for a great performance!

I don’t know who this guy in a trench coat is, but he sang two good songs! The first one was “Tenohira” an up beat song he sang while running around everywhere! The second one is a slow love song, “Kimi ni Aete yokatta”, I can’t help but think I’ve heard this song before…I just can’t remember if I have!! >_< That second one was definitely the better performance/song, I always like how they bring the crowd to join in and sing along, even if it’s one line!! 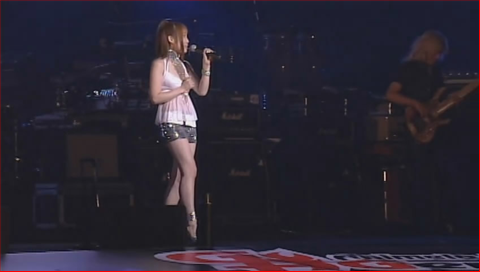 I don’t know of either, but Kuribayashi Minami put on a good show…especially in those really shiny short shorts!! ^_^’

“Yell!” was the ED for Super Robot Wars Original Generation: Divine Wars and “Tsubasa ha pleasure line” is the OP for Chrono Crusade.

Musouka? Or is it Musou Uta? Anyway, it was a song I obsessed while watching Utawarerumono, but after a while I finished watching the anime, the song somehow was forgotten. Animelo 2007 brought it back!! And I still remember the words!!! ^_^ It’s one of those songs outside of your preferences that you somehow come to like…a lot!! Is “Kimi ga tame” the ED for Utawarerumono? I thought it was “Madoromi no Rinne” by Eri Kawai. O_o