The swim team goes to a tri-meet over at another school. And just like any other school, the guys look at them with perverted eyes…even the coach does it. Taking pictures of the girls from Umisho, saying that he MUST video tape the competition. ^_^ Orizuka wins her race flawlessly. It was the captains turn but he was nowhere to be found, luckily he came just in time for the race…and lost!! It seems the only one with talents are the girls, they all won their races. Then came the 50m freestyle race, Amuro’s race! 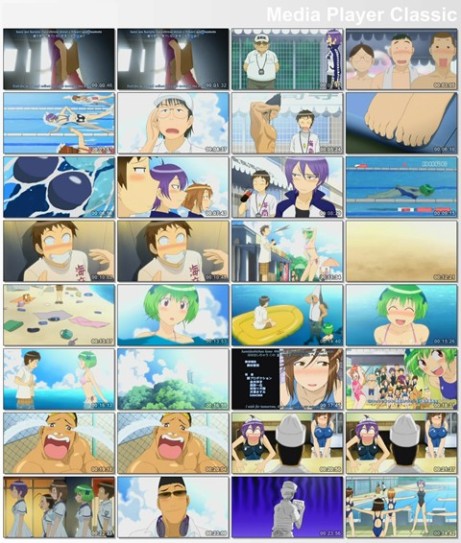 Before the race, Kaname instructs Amuro how to start off properly. She learned pretty quickly! The race started and Amuro swam like she always does, by not coming up for air. Everyone is impressed with her swimming and amazed at how she is breaking school records. She is coming to the finish line in first place…but gets disqualified!! Apparently, you have to get your head out of the water within the first 15m of the race!! Umisho school lost the meet, but everyone was happy they had fun!

It was weird seeing the credits rolling past the halfway point. But it wasn’t over yet, there was a side story! The captain was feeling down because his family’s restaurant was going to be shut down because there wasn’t that much of a profit to be made!! Then the quiet and lovely Shizuoka came up with an idea. Why not have a bathing suit restaurant, it works for the maid cafe does it not? Of course this works well, and gains popularity in one day. The next day the captain is all blinged out and asks the team to help again. There was a reason why it grew more popular than the previous day, the captain and his father hand out “Live Shots” to the customers. Orizuka finds out and beats the hell out of the two of them…the bathing suit restaurant lasted only two days.