Everyone is getting ready for the Watanagashi Festival, we all know what will be coming! Rika is feeling depressed because she is the only one that knows what will happen and can’t really talk to her friends about it. She then realizes that Satoko has been noticing her depression and is asking questions. Rika decided to act like she always does and goes to the base ball game. 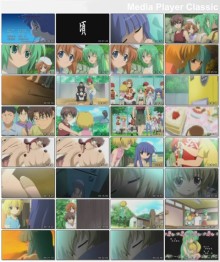 Their team is losing because the other team has a very famous high school pitcher. Satoko calls for reinforcement…Keiichi. Really? That guy? Keiichi arrives with a golf club thinking it was a battle and not a baseball game. He was struck out. But he has a trick up his sleeve. During a break, he talks to the pitcher and tells him to throw the game. The pitcher declines, and Keiichi counterattacks by saying he will spill his secret. That a strong man like fluffy pastries that implies it’s for girls!! The pitcher gives in and throws the game, making Keiichi team win.

After the game, Satoko talks to everyone about Rika and that she will be killed. Everyone is worried and tries to do something, but Rika comes in and says that Satoko was daydreaming. The crew becomes relieved and goes back to their usual ways.