If you’re an anime fan, you should know by now what “Lucky Star” is. And for those who don’t: it’s just a comedy and satirical anime following the school life of four girls (so far). They’re Izumi Konata, Hiiragi Kagami, Hiiragi Tsukasa, and Takara Miyuki.

The main character is Izumi Konata, she’s a HUGE anime and video-game fan. Though, she’s lazy in everything else, school-work, homework, chores, and anything that doesn’t interest her.

I’ve been watching since episode one and try to watch the new episodes once it’s out. I was going to make one post for every individual episode so far, but I thought that was such a hassle!! Might as well start from the most recent episode.

It’s now halfway through the series and we haven’t seen any new characters. Where are the characters from the intro?! Are they even going to show up on the anime? I guess only time will tell. 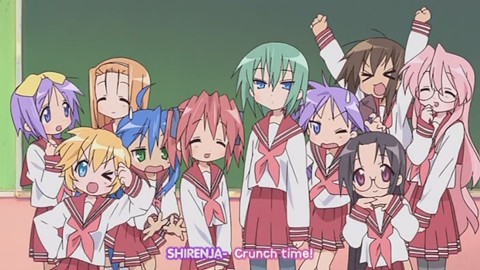 In this episodes the girls go to ComiKet, except for Miyuki…she’s always left out for some reason. Though, Konata did try to invite her, but Miyuki was busy…Kagami already fell for this trick last summer and told Miyuki about it, Konata just wants them to buy stuff for her while she’s buying other stuff.

I guess this year, Konata was able to sucker Tsukasa into it, but I wonder what good that’ll do!! I never been to a huge convention before, but I feel sorry for Tsukasa. She doesn’t seem like she’ll do good in crowds. Tsukasa ended up being lost and was unable to buy anything for Konata. Konata knew this and only gave her tasks that weren’t a priority.

Here are a few anime references showed in this episode: 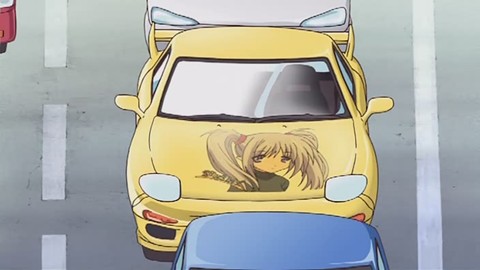 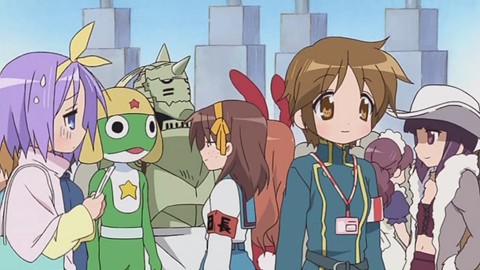 Also, we get to see Kagami’s first experiance with yaoi!!

After ComiKet, they go to the Hiiragi shrine for New Year’s. And we see the Hiiragi sisters in their miko outfits, I wonder how many people are there just to see the girls in their outfits, like Konata’s dad!! ^_^

Last episode, Akira said she’ll be in this episode’s actuall show. But she got sick and couldn’t be in the actual show, but at least they added a cardboard cut out of Akira to take her place!!